On Tuesday the Wizards begin the second of back-to-back two game weeks, facing the Milwaukee Bucks, while they travel to Detroit on Saturday to face off against Andre Drummond and the Pistons.  The Zards, sitting at 4-4 face another week of uncertainty regarding the health of shooting guard Bradley Beal, who has now missed nine straight days with a sore shoulder.  All signs point to Beal not playing on Tuesday, missing his third straight game.  Obviously he has had numerous minor injuries in his NBA career so the coaching and medical staffs are taking a very cautious approach to this latest issue, this early in the season.  The Wizards have struggled coming into this stretch of minimal games, and have played the least amount of games in the league coming into Tuesday. Hopefully the extra practice time has helped the team work on improving their defense, which coming into Week 4, sits 29th (out of 30) in points allowed.

I really don’t want to remember any of the game action from the last two weeks, so instead I’ll prep for the upcoming week with some NBA Doppelgangers.

Kawhi Leonard and that kid from Bad Boys 2

Another game without Bradley Beal means the Wizards supporting cast will have to recreate many of the positives that came out of the game against the Magic on Saturday.  We obviously can’t expect or ask Kris Humphries to hit five three-pointers against the Bucks, but we’ll need him to find his spots and be aggressive early.  If he’s still hot, he can keep on chucking, but the Wizards could really use him spending some more time down low, helping the team on the offensive and defensive glass.  Directly filling in for Beal will be Garrett Temple, who in the start on Saturday had a career high 18 points, while hitting three three-pointers.  Another guy we can’t expect to consistently shoot that well, it will be important for Temple to help Wall run the half-court offense at times, while running with Wall in transition.

For the Bucks, they’ll be without sophomore power forward Jabari Parker, who is missing their three game road trip with a sprained right foot.  Free-agent acquisition Greg Monroe is returning the Verizon Center where he played college basketball at Georgetown, sporting 17.8 ppg and 10.2 rpg averages.  Monroe is currently one of only six players in the league averaging over 10 points and 10 rebounds, and will look to anchor the team’s inside game, while shooting guard Khris Middleton moves around the perimeter.

In game one of the season series the Wizards left Milwaukee with a 118-113 win.  The Wizards were down by 10 going into the fourth quarter, but were able to outscore the Bucks 36-21 in that final quarter.  Although there were many defining moments in that game, the key stretch was from the 3:08 to 2:00 mark when the Wizards took a 102-102 tie and were able to extend it to 111-104 on two threes from Beal and one from Sessions. 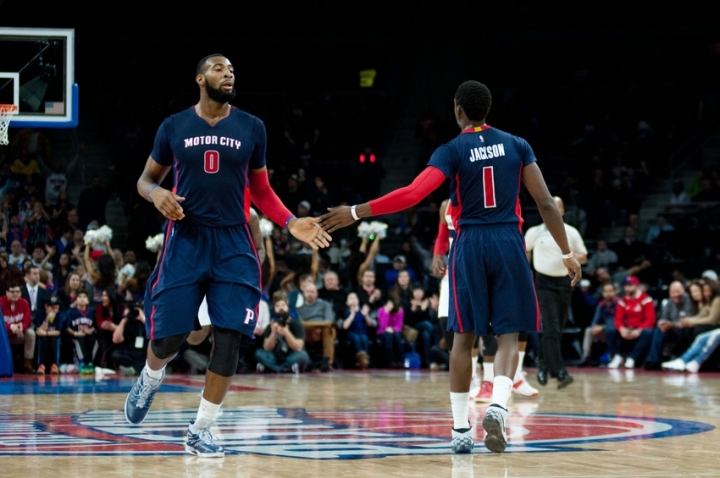 Saturday sees the Wizards head into Detroit to face off against Andre Drummond, Reggie Jackson, and Motor City.  Drummond comes into Week 4 averaging 19 rebounds per game.  This is a scary thought seeing as our starting center Marcin Gortat had only 3 rebounds in the game against the Thunder last week.  Detroit runs a four out one in offense which means that opposing power forwards routinely have to guard the power forward Ersan Ilyasova out at the three-point line, leaving Drummond to battle one on one in the paint.  Even when Drummond is seemingly triple teamed, his energy and pursuit is leading to positives for the Pistons offense.  Drummond’s always been a great rebounder, but has really started to blossom on the offensive side as well, showing improved footwork in the post as you can see below.

This year he became the first player since Wilt Chamberlain in 1970 to total 135 points and 135 rebounds in his first 7 games.  A big part of the Pistons offense is a high 1-5 pick and roll with Reggie Jackson and Drummond, and Wall and Gortat will have to stay focused on defense against this duo.  Their pick and rolls routinely lead to lobs for Drummond, swing passes to the wing players on the three-point line, or a floater from Jackson.  As the Wizards have run a lot of high pick and roll sets in the past, hopefully they can show an ability to defend the set as well.

For the Wizards, look for John Wall to be especially aggressive in his first matchup against Reggie Jackson this year.  This summer, Wall emphatically voiced his displeasure in being paid the same as Jackson, and hopefully he can back up his statements on the court.  Wall worked on his floater a lot this summer, and this is a perfect game to show it off against the blocking ability of Andre Drummond.

One thought on “Wizards Week 4 Preview”