D’Angelo Russell and Jabari Parker are making the number two pick cool again. The number two picks from 2008-2013 were Michael Beasley, Hasheem Thabeet, Evan Turner, Derrick Williams, Michael Kidd-Gilchrist, and Victor Oladipo–hardly a murderer’s row.  LaMarcus Aldridge and Kevin Durant, the #2 picks in 2006 and 2007, changed the teams that drafted them, but other than that it has become clear that the only safe place to pick is #1 (ask any Sixers fan).

Russell, the 2015 #2 pick for the Lakers is a slick passing lefty gunner.  Parker, the 2014 #2 pick for the Bucks is a dunkaholic, scoring power forward made for the small ball era.

They are both hard to value right now after getting off to up-and-down starts, which makes them fun to compare.  They both entered the league with high expectations, underwhelmed initially, and came on strong the second half of this season. Parker, of course, tore his ACL 25 games into his rookie season, essentially turning ’15-16 into  a second rookie year. Russell, meanwhile, spent his rookie year as a supporting member of the Kobe Farewell Tour and somehow managed to isolate himself from his entire team. There is reason to think both players will be significantly more comfortable next season. So who’s better?

As a draft prospect: Duke Jabari vs Ohio State D’Angelo

Jabari Parker had been on GM’s radars for years before he was eligible for the draft. He was the consensus number two pick after Andrew Wiggins and was considered a potential franchise player for the Bucks.

D’Angelo Russell, also a one-and-done, was not quite as highly rated entering college, but won scouts over with his dominating play. Still, Russell was not the consensus number two pick and was considered a bit of a bold selection by the Lakers.

By February the Lakers and Bucks were both far from the playoff hunt and started to feature their young players more. Highlights include a 36-point game from Parker against the Rockets on 2/29, and a 39-point game from Russell against Brooklyn on 3/1 (basically still February). Both players continued to take on larger roles down the stretch of the season, but both hit their high in February before opposing teams started catching on.

I’ll give this one to Russell because the stakes were higher for him. Bucks fans gave Parker some leeway on his slow start because he was coming off major injury, but Russell faced a lot of criticism during the start of the season. February was when Lakers fans started seeing why he was drafted number two.

Players can get better at passing, but to have the gene they have to be born with it. Russell has the passing gene. His vision and creativity make him the most exciting passer to enter the league since John Wall. D’Angelo’s 3.3 assists a game don’t look like much, but he was hardly going to pick up assists when Kobe always had the ball. Russell averaged 5.1 assists per 100 possessions when playing with Kobe and 6.7 when playing without him, per NBAwowy.

But Russell is still learning to harness his full passing ability. Jabari Parker’s first step already allows him to blow by almost all power forwards. His discerning athleticism allows him to turn that space into dunks and looks at the rim, as well as discourages small, faster players from matching up with him. His first step gives Jabari the potential to be a pure scorer at the highest level.

Steals are often considered an “informative” stat when projecting players.  This is possibly because steals measure athleticism and quick hands, or, in my opinion, because some players are just drawn to the ball and always seem to end up it. Regardless, Russell’s 1.5 steals per 36 minutes are encouraging.

Parker shot 76.8% from the free throw line this season on three attempts a game. This is a good sign—if Parker wants to be a scorer in this league he will have to live at the line. The high percentage also bodes well for the future of his outside shot.

This past season D’Angelo Russell made 130 three pointers and Jabari Parker dunked the ball 129 times. 130 threes is the most ever made by a teenager in a season and tied for the 15th most by a rookie. It is also a number Bradley Beal has only reached once in his four-year career. Russell shot 35% from deep, which is not bad considering the number he attempted and the level of difficulty on some of the shots.

Jabari Parker’s 129 dunks were 7th in the league—more than Andre Drummond, LeBron James, or Kevin Durant. As the season went on he regained his pre-injury athleticism, really putting the league on notice by dunking all over the rookie-sophomore game.

Parker made a three a game in college but has not shown NBA range through his first 101 games. Players like Blake Griffin and DeMar DeRozan have managed to be All-Star level scorers without a three point shot, but it’s not easy.

With freaks like Russell Westbrook and Steph Curry playing point guard these days, D’Angelo Russell’s lack of elite athleticism and quickness stands out more than it may have in previous eras. He struggled creating his own shot at times—especially during the first half of the season—because he couldn’t get past his defender or finish around the rim.

Advantage: Parker, because he’s more likely to improve his weakness

Giannis Antentikotumpo is the best prospect on the Bucks or Lakers. He, Jabari, and Khris Middleton provide real hope for the future in Milwaukee. The Lakers have a stock of young prospects themselves with Julius Randle (fun fact: Randle led all power forwards in rebounds this year yet was barely talked about), Jordan Clarkson, and this year’s number two pick—most likely Brandon Ingram—to go along with D’Angelo Russell.

But we’re comparing Los Angeles and Milwaukee here. Kevin Durant has shown you can be an icon in any market size, but in Los Angeles you’re famous just for being on the Lakers. A week into the season Russell was rumored to be dating Kendall Jenner. He denied it, but it was believable. Nobody would even bother to make up something like that about a Bucks player. This one’s an easy call. 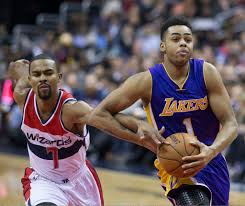 D’Angelo Russell turned himself into one of the most hated players in the league by taking a video of our old friend Nick Young talking about some extra-curricular activities and getting it leaked.

Jabari, meanwhile, showed maturity and resolve in coming back from what must have been a frustrating injury. Us Wizards fans know first hand that not everyone is mature enough to come back from a major injury (cough Gilbert cough cough). Even though Parker went to Duke, he takes this one in a landslide.

To me power forward Paul Pierce is the better player, giving Jabari more upside. It’s unfair to compare Parker to the Truth, a sure-fire Hall-of-Famer. Parker will never shoot like Pierce or create buckets off the dribble like Pierce did—or be the defender Pierce was. But if Parker can be a pure scorer from the four-spot he would be valuable indeed. I may be short-changing Russell a bit with his comparison, but I’m worried his lack of elite athleticism lowers his ceiling. I’ve heard some people make a James Harden comparison, but Russell doesn’t quite have that scoring instinct.

Using my scientific methodology Parker comes out on top, winning five out of nine definitely not randomly chosen categories. Parker’s potential as a scorer that demands double-teams puts him ahead for me.  He is faster than power forwards and stronger than small forwards–a nightly mismatch.

Both players are in a weird place where they are not quite as valuable as they were the day they were drafted, but are still both blue-chip assets with enormous potential. They may even be a bit under the radar because they played their best ball post All-Star break. Neither has show they can be a plus on defense yet, but both have the look of a major piece on offense.

Brandon Ingram, this year’s projected number two pick, looks to continue this new trend of #2 picks who are actually good. I will be really curious to see, one year from now, how Parker, Russell, and Ingram stack up.