Week 12 matches Washington against three Eastern Conference playoff hopefuls and includes four games in six nights.  As has been necessary this season, I’ll highlight the new injury situations in every preview.  As per usual, we’ll gain one body back as we lose another.

Nene said he’s going to “try” to play tonight + Gortat might not play because of a left knee injury. It’s really swollen. Hurt it in Orlando

With Kris Humphries injured as well, Washington will rely on a frontcourt rotation of Nene, Drew Gooden, and Dejuan Blair.  Besides the Chicago matchup, the teams this week aren’t especially reliant on their big men, so frontcourt injuries seem to at least have come at a convenient time.  Let’s hope they’re not too serious though.  Bradley Beal is most likely still a week or so away from returning, and the Wiz are still three games below .500.  The All-Star break seems just over the horizon, but there are still 17 games left, so Washington can’t look ahead to the extended rest just yet.

Speaking of injuries, this week we face two stars who have had different recoveries from their injury issues.  Monday, Washington heads to Chicago to face the Bulls.  While they’re now Jimmy Butler’s team, Derrick Rose still has so much history with the city and franchise, but obviously hasn’t been the same player as he was before his multiple knee surgeries.  On Friday, Washington heads to Indiana to face Paul George and the Pacers.  George, in his first full season since breaking his leg in August 2014, has returned better than he was previously and was garnering MVP talk earlier in the season before his play declined some.  Injuries are an unfortunate part of the game, so to pour one out we look at some of the top plays from former superstars whose had the prime of their careers cut short by injuries.

Players Whose Careers or Primes Ended Too Early

In a packed 4 game week, the first game sends the Wizards to Chicago, where they’ll face the Eastern Conference’s second place team.  The Bulls, while in second place have been very up and down this year, and as with every team in the East benefit from a packed top 8, where they sit four games behind Cleveland for 1st place, but also four games ahead of Boston for 9th place.  Chicago has also benefited from a home heavy start to the season, going 16-5 at home, but 6-8 on the road.  Much of the beginning of the season focused on point guard Derrick Rose’s recovery from a preseason orbital fracture, and integrating back into an offense where he’s the 3rd option.

Chicago is 7-2 in its last 9 games, conveniently all without center Joakim Noah, after losing three straight to Detroit, New York, and Brooklyn, and having Jimmy Butler openly question the team’s direction under first year coach Fred Hoiberg.  Butler, the new face of the franchise has been on a tear in his last six games, averaging 28.5 points, 4.5 rebounds, and 6.2 assists, while shooting 50% from the field and getting to the line for 10.5 free throw attempts per game.  Butler was able to be especially aggressive in the first 3 games as Derrick Rose missed time resting a(nother) sore knee.  Rose’s return doesn’t seem to have negatively affected the team much, as he’s shooting 10% better so far in January than he did in November.  While the team recently got back Rose, they’re looking forward to having Noah return Monday and bolstering the team’s frontcourt unit as they go against an undermanned Wizards frontcourt.

Washington will be in a tough position if Gortat can’t play.  Nene and Gooden can provide solid bench minutes for the Wiz, but with their recent injury issues, can’t really be asked to man the center position for extended minutes.  With Humphries still battling a sore knee look for a big man rotation of Nene, Gooden, and Blair to look to get things done.  Chicago isn’t a great matchup for Washington’s “tiny-ball” lineup, but if foul trouble or injuries become a concern it may be necessary.

There’s still some bad blood from these two teams in recent years so hopefully we can keep it exciting but under control.  Wiz can’t afford any suspensions right now.

After a tough test in Chicago, Washington gets to return home for the third of four matchups against the Bucks this year.  Washington won game 1 by 5 in Milwaukee in what was their second game of the  season, and won game two by 29.  They’ve only played two games, but the matchup seems similar to when the Wiz play the Magic.  Washington just seems to always have Milwaukee’s number, winning 7 of the last 9 meetings.  The Bucks while underwhelming have had some nice plays this season, including a game winner against Dallas last week.

Statistically, it’s easy to tell why the Bucks are not impressing as expected prior to the season:

Head coach Jason Kidd recently had hip surgery and the team is 4-6 in their last 10 games.  Their length is always a main concern for opposing teams, but the lack of shooting is a breath of fresh air for the Wiz who have been burned by the above average shooting teams more than a few times this season.  This is game 3 of 3 in the season series.

The Wiz will spend Friday night in Indianapolis, facing the new look Pacers, who find themselves in 6th place in the East almost halfway through the season.  The only matchup of the season between the two teams saw Indiana crush Washington 123-106 in DC, behind a franchise record 19 three pointers, 13 of which came from George and CJ Miles.  The only real difference in this game was in FG% where Indiana shot 10% better than Washington for the game and 73% from three-point range for the game.  The Wizards had one more turnover (21), one less rebound (40) and one more free throw made.  This game came during Paul George’s absurd month of November where he shot 47.7 FG%, 49.5 3P% and averaged 29.5 points per game.  In December these numbers fell to 37.1 FG%, 35.9 3P%, and 21.4 ppg.  If Washington can hold George to these numbers they should be in pretty good shape for this game.  Indiana is 5-7 in their last 12 games heading into week 12.

John Wall has been playing great since the start of December, so don’t expect to see his stat line look like it did in the first meeting when he attempted 9 shots and had 8 turnovers. 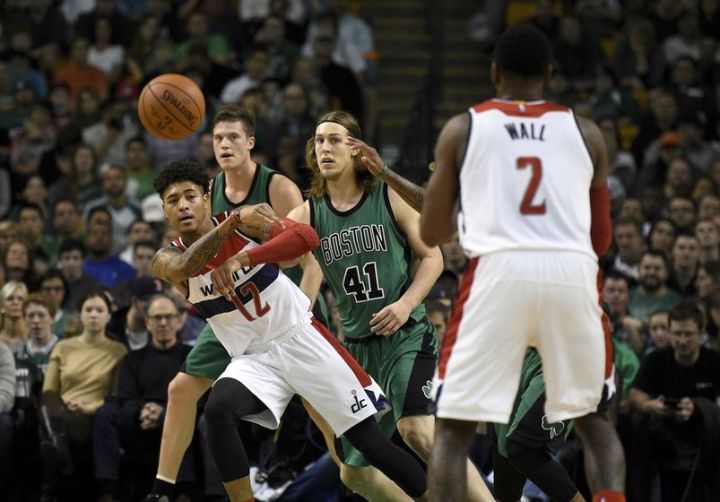 Saturday will be the last of the four games in six nights stretch for Washington, and the third of four matchups against Boston.  This will be the first matchup at Verizon Center, and the Wizards look for revenge against a Celtics team that has outscored them by 53 points in the two games in Boston.

The Celtics are in the midst of their worst stretch of the season, losing five of their last six games, including consecutive losses to the Lakers and Nets.  This stretch has coincided with the return of guard Marcus Smart to the lineup after missing over a month to injury.  In the seven games since returning, Smart is shooting 28.6% from the field, greatly limiting Boston’s offensive abilities.  Boston’s outlook is still not terrible as the last five games have come by an average of 5.6 points.

What really hurt Washington in the first two games were poor shooting (36.6%), turnovers (23 per game) and losing the rebounding advantage (-20).  The Wiz haven’t really been much better at home this season and this could just be a bad matchup for the team (similar to Toronto).  I’ve mentioned it before but being able to play five players that both stretch the floor with their shooting, and crash the boards has been especially tough on Washington.  The Wizards have lowered their number of turnovers recently and I’d expect the three categories above to be the defining statistics again.

I propose letting the Wizards play the Magic every game

25 percent of the Wizards' wins this season are against the Orlando Magic.