Godzingis, PorzinGod, KP6, Zinger.  No matter the name you call him, it’s clear one month into the season that Kristaps Porzingis is a real building block that the Knicks have to be ecstatic is only 19 years old.  Saturday night in a win against the Rockets, Porzingis posted a line of 24 points, 14 rebounds and 7 blocks on 8-12 shooting.  It truly was a block party in Houston on Saturday and Porzingis was the main event.

In his career high 29 point outburst against Charlotte, KP had the entire Garden chanting both his name and MVP.

While his stretch of games hasn’t been as absurd as “Linsanity” it’s very apparent that this level of play can actually be a building block for the future of the Knicks, as opposed to Jeremy Lin’s two-week stretch in 2012.  Early in the year Porzingis was catching eyes with his highlight reel putback dunks. But KP6 has shown that he has much more to offer New York this early in his career.  That’s not to say that those putbacks weren’t fun to watch.

Watching the bench’s reaction is almost as great as Kristaps’ reaction, and one can only assume that the Knicks fans in attendance at the draft feel a little differently about the pick today than they did in June.

In a road game against Charlotte, Porzingis had 10 points and 15 rebounds and was 0.1 seconds from winning the game with this deep three that was waved off after review.

What you don’t see in the vine above is Porzingis not setting the down screen for 8x All-Star Carmelo Anthony and instead abandoning the play to flare out for the three-point attempt.  Although not running the drawn up play, it is great to see the confidence that he has in his game, especially this early in his career.  This is also from a player who grew up a huge fan of Carmelo and knows the amount of big shots he’s hit in his career.

Porzingis, standing 7’3″, was drafted fourth overall, largely on upside and it’s remarkable to see how quickly his talents have translated to the NBA game.  Cynics cited the fact that Anthony, the unquestioned star of the team, is 31, coming off knee surgery and a 40 game season in 2014-2015, and would need a sidekick who could come in and immediately help the Knicks team compete for the playoffs.  It was thought that Porzingis would probably need two or three years before finally showing the skills and value that you usually see from a number four overall pick.  Stephen A. Smith emphatically voiced his displeasure with Phil Jackson (as he loudly does with everything)

Instead, Porzingis has started all 14 games so far, is averaging 13.2 points, 8.8 rebounds, 1.5 blocks, and has been the Knicks second best player most nights (first a few) while helping the Knicks out to a 8-6 record by November 21st.  Last season by comparison, the Knicks won their eighth game on January 23rd.  Obviously New York’s improvement has also come from the offseason additions of Robin Lopez, Aaron Afflalo, and Derrick Williams, but no one this season has been as fun and exciting for the Knicks as Godzingis. 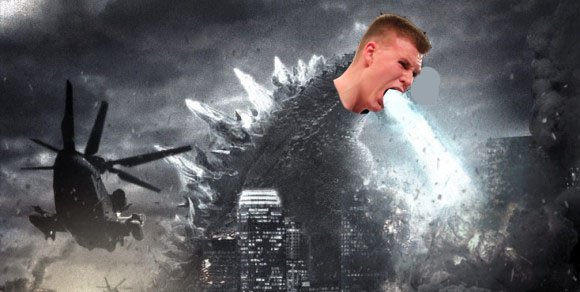 RT IF YOU THINK THIS KID IS CURRENTLY WEARING A PORZINGIS JERSEY pic.twitter.com/TrFUN9W2I7

One thought on “The Man, The Legend: GODZINGIS”